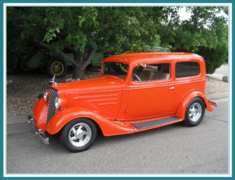 I joined the ColoRODans in mid-1995

Before I joined the ColoRODans I attended their “Show and Shine” for many years. The first vehicle I entered in the show was a 1957 Ford p/u that I bought from my dad in 1970, I still own and drive it almost daily. At one point I had a strong running Pontiac motor in it backed by a T-10, it was great fun and surprised a lot of folks. After runnin’ the beans out of that motor I replaced it with a 350 Chevy & turbo 400, still kinda fun.

After completing a big block Chevy powered T bucket roadster in the mid 80′s it was my new wild ride. I always enjoyed driving it in the ColoRODan’s cruise to Estes Park each year even though I seemed to get caught in the afternoon rain without fail. After many years of enduring rain and bugs I thought I would build a rod with a roof and windows. I found a real nice stock 1937 Chevy sedan and started making plans for its transformation. In 1997 I went to the Street Rod Nationals in Pueblo to go parts shopping for it when I ran across a Hugger Orange 1935 Chevy sedan in the show for sale, I was there to buy parts, not a car. I like building my own projects but I really liked it and the price was surprisingly low, I could not pass it up. I have made numerous changes on it to suit me and now have about 60,000 miles on it, great road machine! It’s been to the West Coast to KY and all over in between. Usually go on at least one big trip each year with fellow club members, truly my favorite part of being a “Street Rodder” and hope to do this for many years to come.

Vehicles I currently own:

I also have and enjoy antique motorcycles and tractors. Positions I have held or currently hold in the club: President, Secretary, Door Prize Chairman, Member of the Board of Directors, Board Secretary 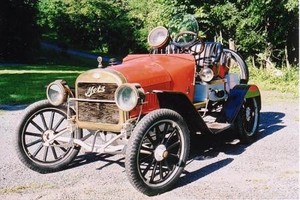