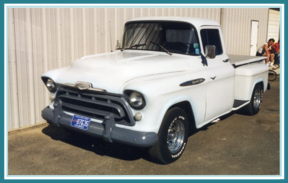 In 1988 I joined the Rocky Mountain Classic Chevy Club.  At that time I owned a '57 Chev model 210 sports coupe and had participated in several functions.

It smoked a lot so I decided to use another motor. I got a 327 cu.in. motor out of a ’66 Impala that my Uncle had picked up in his business of reclaiming vehicles.  The Impala had been left along the highway for the police to claim in Nebraska. I rebuilt the motor myself, and had the crank built up and re-chromed. I bored the motor .020-over, added  new pistons and rods as well as a high volume-high pressure oil pump. To the top end I added a modified camshaft with a set of 202 heads. Then I installed a Edlebrock split level intake manifold with an Edlebrock street performer 750 carburetor. To this combination I installed an overdrive to a 3 speed transmission that was a column shift. I still wasn’t happy so I changed the differential to a 3.56:1 for highway driving.

During this process I acquired a set of rims from a yard sale in Roxborough from some guy who said his Toyota pickup didn’t have enough power to get him down the road like he wanted. I gave him $40.00 for the set of four. I proceeded to clean up the truck frame and paint it. The brakes felt kind of funny, so I started going through that system. The master cylinder was about half full of dirt so it was a wonder I even had brakes at all!

I continued working on it, replacing the driver door and straightening out the dents and dings – applying primer as I went. I took it to many parades and car shows during the many work stages being performed. The truck placed second  in an Albuquerque, New Mexico show. I received, two different trophies for things such as the amount of primer on the vehicle, and for my exhaust pipe configuration at the Funplex Car show in following years. My lady friend, Mickey Hendrickson, had the seat upholstered as a birthday present one year, and the following year I painted the truck Dove Gray with a Teal tinted clear coat. I have been asked many times when I plan on painting the primer and I always have to take them up close to see the teal color heavily accented around the front grill and the fender wells. This truck has been to the Goodland, Kansas car show twelve times, the Atwood, Kansas show twice, the Laramie, Wyoming Buckingham Mall show three times, Westminster Mall at least three times, Gateway, Colorado car show once, the Keensburg, Colorado show fourteen times, and many countless parades.

The chassis, except for the drive train, is all original as is the body. The windshield was replaced in 2006, and I powder-coated the rims to give them a different look. I use this truck in a lot of parades, so I installed two 200 watt amplifiers to power my concert speakers so that I can play music at the parades. On the 4th of July Parade in Firestone in 2006 I won second place for the presentation of music. It has been a really faithful vehicle. When I want power – I have it, and when I want to do a parade on the hottest day of the year, it doesn’t overheat.

My immediate family includes my first son, Byron and his wife, Brandi, their daughters, Stephanie and Kathleen, and their son Matthew. Byron also gets in on the classic car action with his ’78 Monte Carlo Chevy mounted on a K5 blazer chassis. Byron built the car which he bought for $150 in 1995 and uses it mostly for fun.

My second son, Paul, works for Transwest GMC in Commerce City. He sports a 1970 Monte Carlo dragster. His family consists of his wife, Amy (who owns a 1969 Pontiac Trans Am show car), his son, Tristan, and two daughters, Auriana and Lexis. 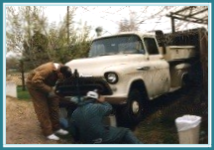 My third son is Tony, and he drives a 1978 El Camino to shows and parades. The whole family drives either a Chevrolet or a GMC as their everyday driver. You could call this a “General Motors Family!”

At the present time I am beginning to rebuild a 1962 Chevrolet pickup. It started out as a fleet-side which I am going to turn it into a step side with an 8’ bed. It had a six cylinder motor which will grow into a 327 V-8 for a little more power. Also, I am pondering building a four wheel drive “Woodie” pickup. As my regular job is a cabinetmaker, I have connections where I can get birch or any other wood for this project.